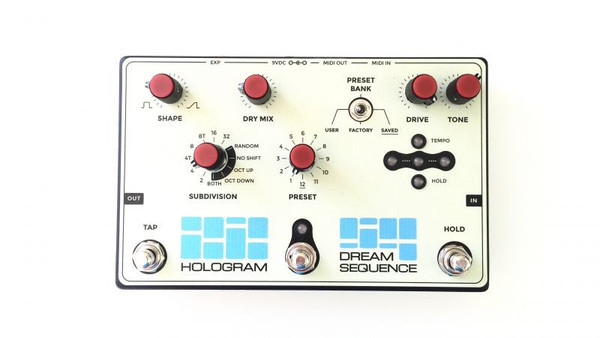 It’s a sequencer, an envelope shaper, a pitch shifter, a sampler, and more.
It’s a source of inspiration that can create synth-like arpeggios, pulsating sheets of sub-octave distortion, shimmering, ethereal chord washes, and a limitless number of other new sounds.

SOMETHING NEW:
Dream Sequence is built around a pattern-based rhythmic Sequencer that pitch shifts your instrument up or down one octave. This allows for unique Arpeggiator and Tremolo patterns at moderate tempos, churning, atmospheric effects at slow tempos, and wild Modulation-like effects at high speeds.

MAKE AND SAVE YOUR OWN PRESETS:
Dream Sequence lends itself to creating chaotic, often unexpected sounds. Any sound you create or modify can be saved instantly to the “Saved” Preset Bank and recalled later. This includes the positions of all the knobs (Shape, Dry Mix, Drive, and Tone), as well as Tempo, and any Knob Movements that you’ve recorded.

TAP TEMPO
Hologram’s proprietary, hassle-free Tap Tempo system allows you to synchronize with other musicians effortlessly. Tap as few, or as many, times as you want (even throughout an entire song) and Dream Sequence will smoothly interpret the tempo changes without artifacts.

“HOLD” SAMPLER
Dream Sequence’s “Hold” function allows you to sample a chord or note and sustain it indefinitely; it then feeds this sample into the pattern sequencer, allowing you to play on top of it to create harmonies, drones, and many other new tonal possibilities.

DIGITALLY-CONTROLLED ANALOG DRIVE AND TONE
Dream Sequence has a built-in analog overdrive and tone circuit. Save drive and tone settings for each preset, or manipulate them as part of your patterns.

INFINITELY CUSTOMIZABLE
Dream Sequence is meant to kickstart your creativity; it ships with a variety of presets to get you started, but it’s easy to customize these sounds to your tastes, and even create your own patterns and presets.

WAVE SHAPES
The User Bank contains 12 building-block patterns and allows you to use the Subdivision and Shape controls to customize them. The Shape Knob controls the contour of the waveform used by the step sequencer, smoothly morphing from short, percussive, square-wave sounds to backwards-guitar-like ramp waves, and many sounds in between.

PATTERN RECORDER
In addition to the 24 preset patterns included in the Dream Sequence, you can record your own patterns by tapping the 3 footswitches in sequence, or via MIDI in a DAW like Ableton Live or Logic. These patterns can then be saved in any of the 11 User Preset Locations.

RECORD KNOB MOVEMENTS
Twist knobs and record their movements to create patterns on the fly, then sync them to the band with Tap Tempo. You can automate the Drive, Tone, or Shape Controls to produce pulsing distortions, modulation-like effects, and then save them to a Preset.

各パーツ役目
SHAPE
When in the “User Bank,” the Shape knob controls the waveform used by the step sequencer, morphing from choppy square waves to “backwards” like ramp waves.

In the Auxiliary Modes (Octave Up, Octave Down, or Both), the Shape Knob controls the volume of the pitch shifted signal, for use as a standard pitch shifter. Its movements can be recorded and played back to create wild new sounds of your own.

DRY MIX
Dry Mix controls the balance between the analog, original instrument signal and the effected signal. Its position can be saved as part of any presets you create.

PRESET BANK
The Preset Bank switch selects between the “User,” “Factory,” and “Saved” banks of presets.

The User Bank contains simple “building-block” step sequencer patterns that can be altered by using the Shape and Subdivision controls.

The Factory Bank contains more complex presets (not editable via Shape and Subdivision). Presets of this kind can be created and saved to the pedal via a DAW like Logic or Ableton Live.

The Saved Bank contains 11 locations for saving your own presets. Instead of a 12th Preset, the Saved Bank’s 12th location launches the Pattern Recorder, allowing you to create your own sequences by tapping the 3 footswitches.

DRIVE & TONE
Drive controls the amount of distortion present at the output. Dream Sequence uses a digitally-controlled, analog distortion stage at the output. This means that although it is an analog distortion, its controls can be saved as part of presets or patterns. Dream Sequence automatically compensates for the amount of gain introduced by the Drive control by reducing the output volume proportionally; although the Drive control provides more than 10x gain, it will remain at a consistent output level, like an automated version of an amplifier’s “Master Volume” control.

Both of these controls’ settings can be saved as part of a preset, and their movements can be recorded and played back.

SUBDIVISION
The Subdivision rotary switch selects the musical subdivision of the pattern sequencer when in the “User” Bank.

It also allows you to select one of 5 Auxiliary Modes:

Random: the sequencer will bounce randomly between octave up, middle octave, and octave down. Use the shape knob to control the speed of its movement.

No Shift: This allows you to use just the Hold, Drive, and Tone controls, without any pitch shifting applied. The Shape knob controls the volume of the original signal and can be automated to create custom tremolo effects.

Three pitch shifter modes (Octave Up, Octave Down, Octave Up+Down) also allow you to use Dream Sequence as a standard pitch shifter without applying any rhythmic effects. The Shape knob controls the volume of the pitch shifted signal and can be automated to create interesting textures.

Instead of a 12th Preset, the Saved Bank’s 12th location launches the Pattern Recorder, allowing you to create your own sequences by tapping the 3 footswitches.

INDICATOR LIGHTS
The middle row of indicator lights display the volume of each octave voice (Octave Down, Middle Octave, and Octave Up) to give you an idea of what each preset pattern is doing.

Holding down the Tap button while twisting the Dry Mix knob also provides a manual tempo control as an alternative to the Tap Tempo system.

Holding the Bypass footswitch will allow the Shape, Drive, and Tone controls’ movements to be recorded and played back.

HOLD SWITCH
The Hold footswitch allows you to sustain a note or chord indefinitely, and even play “on top” of this sustained signal.

MIDI IN / OUT
Clock it with MIDI, or even create sequences in your favorite DAW program. Dream Sequence can also clock other pedals via Tap Tempo with its MIDI Output.

EXPRESSION PEDAL INPUT
Plug in an expression pedal, and Dream Sequence will allow the user to assign it to Distortion, Tone, Pattern Subdivision, or Tempo.