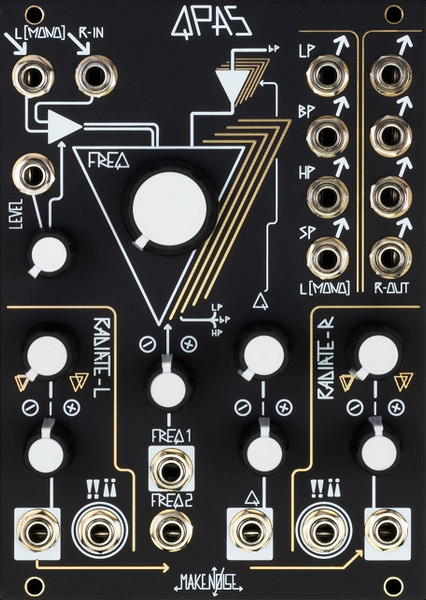 The Quad Peak Animation System combines the auditory enveloping of stereo spaced peaks with the animation of two or more peaks in a single channel dancing around each other or engaging in primitive vocalizations. QPAS is Quad Core, containing four identical state variable filter cores with a control system powerful enough to guide them in stereo multi-peak operation, but simple enough to encourage system integration rather than domination.

The Story of the QPAS by Tony Rolando

When I worked at Moog calibrating Voyagers, I monitored with headphones, and one of my favorite sound sensations was that of the stereo low pass filter. You might not even recall that the Voyager had a stereo Dual LPF. It is under utilized since most folks are trying to achieve classic Model D goodness, and the OG MiniMoog was a very mono instrument.

The binaural effect of a stereo Dual LPF is simple: one channel of the sound is brighter than the other. However, the effect is heightened when the filter has an exponential response and the cutoff is modulated. At lower cutoff frequencies the two channels appear to move at similar velocities, but as the cutoff frequency increases, one channel will smoothly increase in velocity, becoming brighter faster. The other channel lags behind, but eventually reaches the same velocity, and finally at high cutoff frequencies the two channels coalesce into full brightness. Where the mono LPF smashes you in the forehead with simple heavy sound, the stereo LPF envelops you, putting you inside the heavy sound.

When I developed the QMMG I learned about multi-peak filtering. Another under-utilized technique, this is processing a single channel of sound, with multiple filter channels, which are modulated, and then summed together to create a new version of the original sound. On the QMMG all four channels of filters were summed to the MIX OUT. There were a few normalizations, but they did not really ease or encourage multi-peak use. The QMMG UI was awkward for use as a multi-peak filter.

A common use for multi-peak filtering is the creation of formants, where multiple band pass filters are carefully programmed to generate human vowel sounds. This can be fun but it requires meticulous programming. If you forget about formants and just modulate until it sounds good, a multi-peak filter can be gorgeous fun. When the multiple peaks are offset from each other and modulated, the effect can be dizzying, as the sound appears to be dancing with itself, moving in many directions and yet it is still a mono sound. It is an auditory illusion.

I began thinking about what it would be like to have BOTH effects simultaneously… the binaural enveloping of the stereo spaced peaks AND the animation of two or more peaks in a single channel dancing around each other. Obviously some primitive formants could occur as well if some inventive modulation destinations were offered.

QPAS is short for Quad Peak Animation System. Inside the QPAS there are four identical state variable filter cores with a control system devoted to utilizing them in a stereo multi-peak configuration amongst other things.

I wanted to design a dramatic stereo filter that could also be dynamically animated, primitively vocal and also capable of mono to stereo, stereo to mono, mono to mono and stereo to stereo utilities. Something that was more functional than just linking multiple filter modules.

We needed at least two filter cores to achieve stereo or multi peak animation and so we had to first design a single filter core where the character and repeatability was not so defined by the vactrol utilized in other MN filters. I enjoy the QMMG and MMG, but they require many trims and specialized selection of the vactrol parts to work well and even then there is a great deal of variation from one unit to the next. That might not work well for a stereo filter. We developed several completely different cores before finding the right one.

Once we had a good filter core designed, we began prototyping a multi-core, stereo version. We attempted 2, 3 and 4 core versions. It was not until we reached 4 cores that we achieved the animation and stereo image I had been imagining.

Finally we had to come up with a way to control 4 filter cores simultaneously that was powerful but simple enough to encourage system integration rather than system domination.

The Radiate Left and Right parameters define the stereo image and peak animation of the final sound. I believe they are an elegant way to handle animation of multiple filter cores within a modular synthesizer. The normalization between the two Radiate parameter further eases this handling. Radiate offsets the Left and Right sides from the Center Cutoff Frequency creating the stereo image while simultaneously moving the two peaks in the associated channel away from each other, or back together again, creating the peak animation. Radiate could also be used to program primitive formants.

The Cutoff and Q (or resonance) parameters are linked to all four filter cores. Adjusting these parameters may result in pronounced changes in the sound because they are changing the center Cutoff Frequency and Q for all four filter cores simultaneously. But remember, since all 4 cores may be modulated and/ or offset to different cutoff frequencies, and the response of this filter is highly exponential, and the perceived strength of resonance varies with cutoff frequency, modulating these macro parameters is capable of animating the animation and shifting the entire stereo image. This is why Cutoff Frequency has such a large knob.

The !!¡¡ inputs are intentionally mysterious inputs that may be used with just about any signal. We wanted to encourage blind patch experimentation. Audio rate modulations create sidebands that may aid in the creation of those primitive vocaloid sounds or work to decimate the peaks with quasi aliasing, resulting in low digital tech crunch. Slower modulation, such as a pattern of gates, may serve to accent particular moments in time or even cause spurious damped oscillations.

At the input I added a stereo VCA. The traditional location for a VCA is post-filter, so my hope is that this pre-filter VCA will encourage the less common signal path and be inspirational to folks. By design the QPAS will not self oscillate, but with high Q settings it may be excited by an input signal. Having a VCA pre-filter encourages exploration of the dampened ringing that results from the excitation of the QPAS filter cores.

We included the 3 most desired filter responses: Low Pass, Band Pass and Highpass, and were left enough space in the module to add another pair of outputs. I went back to the prototype and experimented with adding and subtracting different combinations of taps from the filter cores. We wanted to create a filter type that would allow for animation of resonant peaks without the loss of bottom or top end of the spectrum that must occur in a LP, BP or HP filter to give those types their sound. We also wanted to add something that could not be achieved by mixing the existing LP, BP and HP outputs. The SP, or Smile Pass, output is the subtle result of that experimentation.